Here's How the Cost of College Has Changed Since the 1960S

Getting a college degree has typically paved the way for a better economic future. Those with bachelor's degrees typically earn 75% more over their lifetimes than they would have with only a high school diploma.

The price of that college degree has become more daunting by the year. The average undergraduate tuition, fees, room, and board for full-time students in the 2020-21 school year was $25,910.

While grants and scholarships offset the cost of college, many people finance their higher education through student loans, which has resulted in about 44 million Americans who are now paying off $1.7 trillion in student debt.

Sound Dollar examined data from the National Center for Education Statistics to see how college costs for private and public higher education institutions have changed between the 1963 and 2020 academic years, the latest data available. Tuition and fees were weighted by the number of full-time-equivalent undergraduates, while room and board are based on full-time undergraduate students.

Room and board accounts for student housing and meal plans. For public institutions, the in-district or in-state tuition was used. To account for inflation, amounts were calculated in today's dollars using the Consumer Price Index. 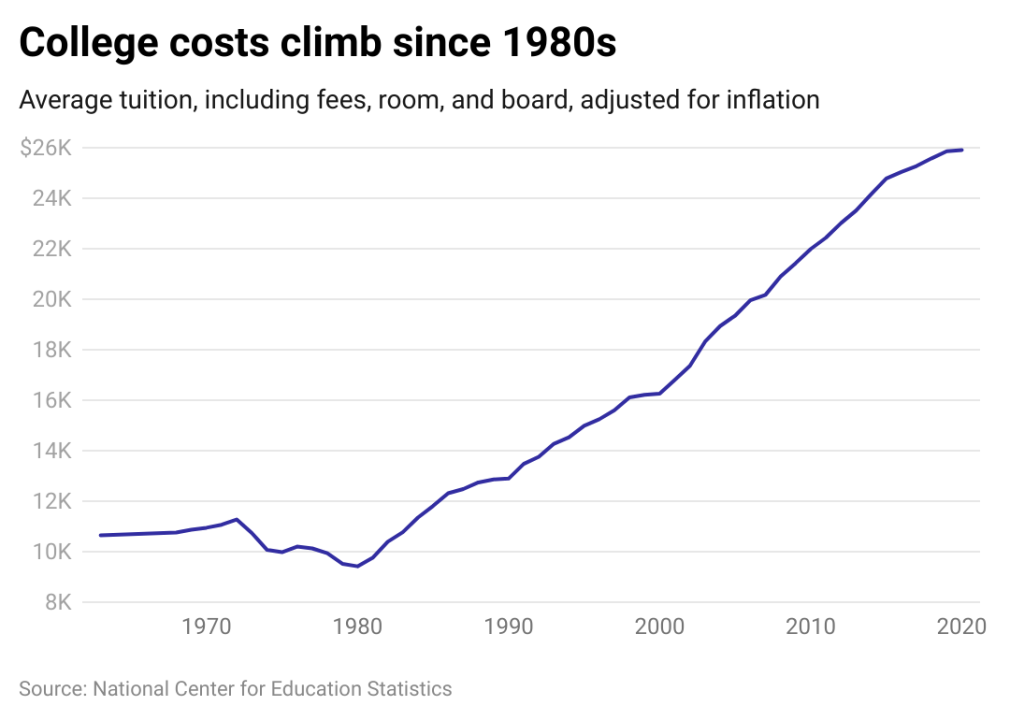 The Cost of College Since 1963

In the 1940s, '50s, and '60s, the federal government passed several pieces of legislation that sent more money to states to fund higher education and kept college costs down. More people opted to go to college because it was more affordable.

In the last 15 years, states have slashed funding for colleges, spending $6.6 billion less on higher education in 2018 than they did in 2008. Colleges opted to shift more of the cost burden onto students by increasing tuition. Household income hasn't kept up with these increases, so students have primarily turned to student loans to fund their education. 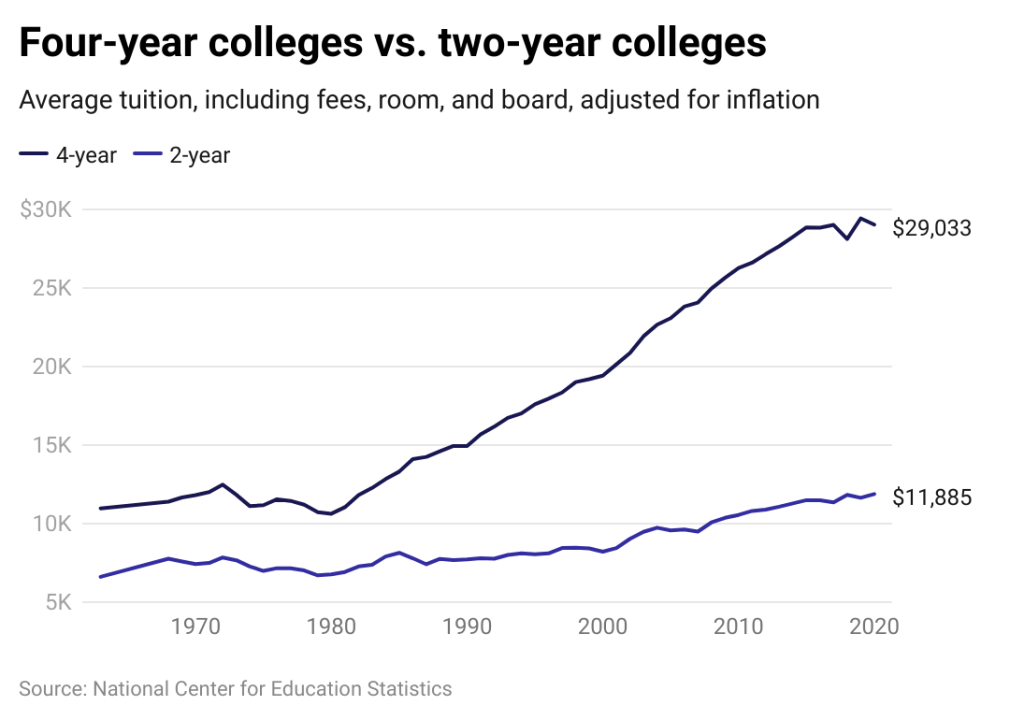 Two-year colleges tend to target commuter students who live at home, and they can also offer more skills-based or technical programs, both of which help keep the school's overall operating budget lower. While tuition and fees are much cheaper at two-year schools, they do get just 25% of their revenue from tuition. Cuts in state funding over the last 15 years have caused tuition at these institutions to creep up. 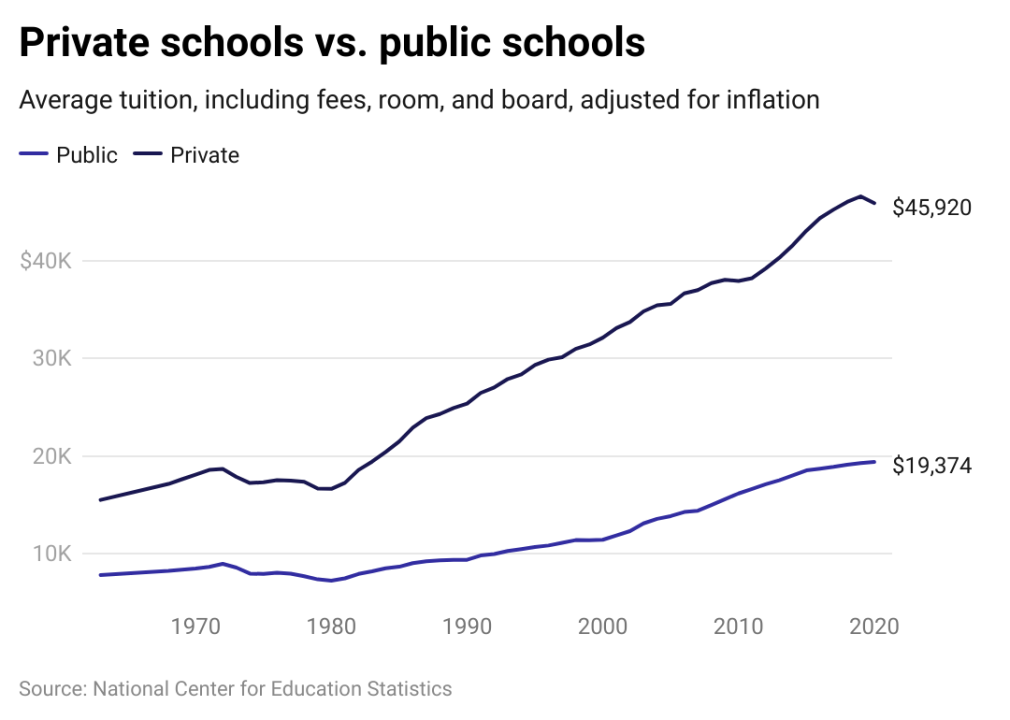 The sticker price of tuition at private schools has far outpaced that of public schools over the last 30 years. Private schools don't get government funding, so they rely on their endowment, tuition dollars, and donations to cover their costs. They also tend to be smaller than publicly funded schools, so they often charge more tuition and fees since there are fewer students.

That said, private schools often offer tuition discounts as a way to make the costs seem more bearable. These discounts can include merit-based awards, fellowships, grants, and other funds that lower the full tuition price. In 2021-2022, first-time, first-year students at private universities received an estimated 54.5% discount rate on average, which is an all-time high according to the National Association of College and University Business Officers. Among all undergraduates, private universities offered a 49% average tuition discount rate. Between 2020 and 2022, many schools offered discounts for the academic year due to the coronavirus pandemic, though many did not renew them when students returned to in-person classes. Colleges leverage on-campus room and board as another source of revenue. In the early 2000s, many colleges added more amenities, technology, and specialized dining options to make them more attractive to prospective students who wanted all the comforts of home. Of course, this contributed to higher costs in terms of maintenance.

While the cost of food has gone down over time, that could be a result of how meal statistics are defined. Prior to the 1986-1987 academic year, board was defined as meals seven days a week, without any insight into how many meals were actually served. Now it's defined as 20 meals per week.

This story originally appeared on Sound Dollar and was produced and
distributed in partnership with Stacker Studio.