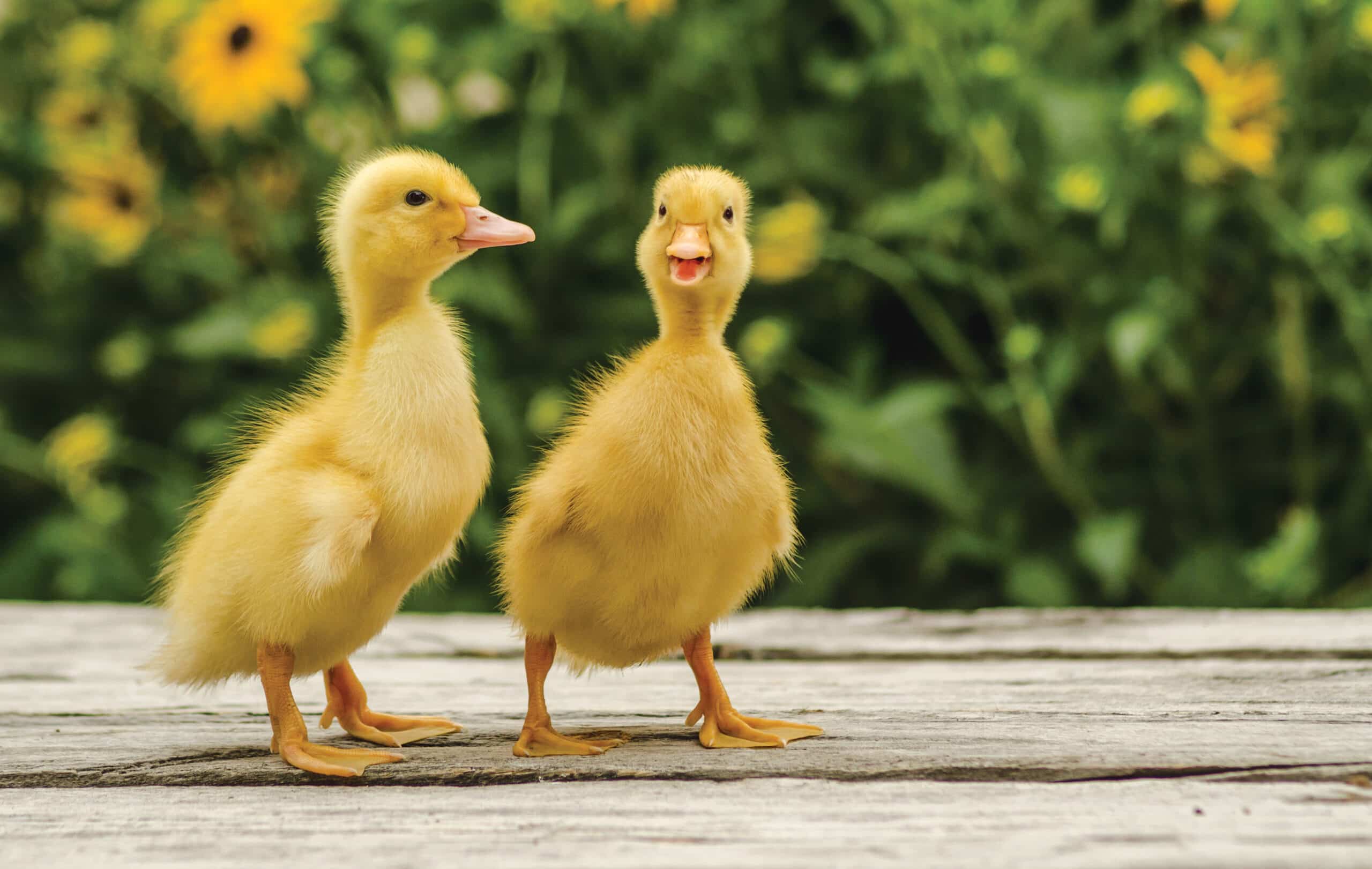 When most people think of homesteading, they think of chickens. Ducks can be useful on a homestead as well. Many different duck breeds would be perfect for beginners.

Here are the top 10 duck breeds for beginners.

Why Are Ducks Good for Homesteading?

Domestic ducks are excellent foragers and can help control pests on your property. They are also straightforward to care for and require much less space than chickens. Ducks also produce high-quality meat and eggs that are rich in nutrients.

If you’re keeping chickens, you can add ducks, and they will live in harmony.

Side-by-side duck eggs look nearly identical to chicken eggs. The difference is in the size, shell texture, and yolk color.

Nearly all domestic duck breeds will lay eggs larger than chickens and wild mallards. The shell will also be far thicker than the other breeds of chickens. The yolk is usually much more orange than the yellow of a chicken egg.

If you have an egg-laying hen, enjoy it!

Here are our top picks for the best duck breeds for beginners:

Pekin ducks are the most popular domestic duck breed in the United States. They were imported into the United States in 1873. They are incredibly hardy against disease, which makes them optimal for homesteads. I find it quite amazing that Pekin’s ancestor is the wild mallard. What a difference between the two. Pekins have that bright orange bill and white feathers compared to any wild duck. It’s a drastic difference.

Your white Pekin duck will lay 50-150 large white eggs every year. They are not known for going broody, so you will need an incubator if you're planning on ducklings. Their lifespan is 8-12 years. Enjoy all those white eggs.

Domesticated duck breeds are rather vocal to their human caretakers. The Pekin duck is the friendliest duck breed and makes a great pet. If you have close neighbors, you should probably avoid Pekins as they can be very loud.

Khaki Campbell ducks are a British breed of domestic duck. They were developed in the late 1800s for their eggs and as a meat bird. Khaki Campbells are excellent layers, laying up to 300 eggs per year. They have a brown body.

Khaki Campbells have a lifespan of around 12 years. It’s relatively common to see many older birds when they’re cared for in a safe environment. They are also one of the most cold-hardy breeds, making them perfect for homesteaders in colder climates.

This duck breed is very friendly and makes a great pet duck. Khaki Campbells are a relatively quiet breed, making them optimal for suburban settings with neighbors close by.

Khaki Campbell ducklings are the best.

The Cayuga duck is a North American duck breed. They are a medium-sized breed with an average weight of 4-9lbs. Females are generally heavier than males. They are black with a green hue, but they slowly turn to white feathers as they age. They have a black bill darker than any other breed.

They are a great beginner domesticated breeds because of their adaptability to different climates. They lay an average of 150 eggs per year.

Cayugas prefer to free-range rather than being caged, so if you are considering this breed, make sure that you have an adequate amount of land to support them.

The Indian Runner duck is a tall, thin breed of domestic duck. They were originally bred in Indonesia for pest control. However, they are now widely considered among the best pet ducks because of their friendly and social nature. Most popular duck breeds love munching on anything green.

Indian Runners will lay around 200 eggs per year. They are great foragers, so if you have a lot of vegetation on your property, you can use this to help supplement their diet.

If you're considering an Indian Runner, make sure you have a large backyard or acreage for them to roam freely. This breed is very active and needs a lot of space to run and play. They are great backyard keepers and will make sure your yard is free from insects and pests.

The Rouen duck is the best duck breed from France. They are similar in appearance to the Mallard but are much larger, averaging 7lbs.

Rouens are excellent layers, laying around 200 eggs per year. They are a reasonably calm breed, making them perfect for families. They are also great foragers and do well on a homestead.

The drakes and hens each have distinctive features, with male ducks sporting an iridescent green head. The females' plumage is plainer, usually coming in varying shades of brown.

The Welsh Harlequin duck is a British breed of domestic duck. They were developed in the 1970s by crossing the Khaki Campbell and the Cayuga. The black bills are one of many breed characteristics.

This breed is known for its egg-laying abilities, with hens averaging 200 eggs per year. They are known to be even better layers than Khaki Campbells. Welsh Harlequins are also great foragers and make excellent meat birds.

They are a calm and friendly breed that does well around children.

The Muscovy duck is a large South American breed of domestic duck. While all other domestic duck breeds are descended from the mallard, Muscovy ducks are not. There has long been a debate on whether or not Muscovys are actual “ducks.” Some people prefer to call them “perching waterfowl.”

The Muscovy duck will lay an average of 180 extra-large white eggs a year.

Muscovies are great ducks if you have neighbors because they hiss rather than quack or honk. They are flighted birds, so you may need to clip their wings if you don't want to run the risk of them flying away.

They are also known to produce delicious duck meat.

Buff Orpingtons lay between 130 and 180 eggs per year. They have a pretty tan plumage and a sweet personality.

They are listed as a threatened breed.

The Saxony duck is a German breed of domestic duck. They were developed in the 1930s, and all of the breeding stock was lost in World War II. Because of this, Saxony ducks are listed as critically endangered.

Saxonies lay around 140 eggs per year and have unique plumage. Males have the typical mallard pattern, but the coloring sets them apart. Saxony males have grey head and wing markings, with a chestnut-colored plump breast and a cream belly. Females are a tan color with cream accents, including cream facial stripes and neck bands.

They are known to be a calm and curious breed that is excellent foragers. They are a heavyweight breed that is fast-growing, making them optimal for consumption.

Swedish ducks are a dual-purpose medium-weight breed. They lay 3-4 eggs a week in varying colors.

Swedish ducks are slow-growing, so they would not be optimal for consumption, but they are excellent foragers and have a calm temperament. These characteristics make them optimal to be raised for eggs or pets.

Which Duck Breed Is for You?

There are a variety of domesticated ducks to choose from when homesteading. Some breeds are best suited for meat, while others are better as egg producers or pets. Whichever you choose, ducks are a fun and entertaining addition to any homestead.

Budget Challenge: Are You Ready?